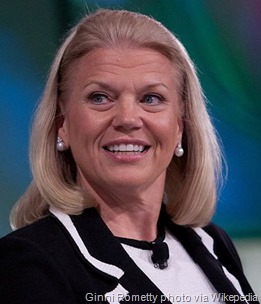 culled from:http://blog.startupprofessionals.com
Do you think men make better entrepreneurs than women, and why? I did some research on this subject a while back, and I found some interesting perspectives. Everyone seems to agree that women think differently than men, and run their businesses differently, but there is a lot less agreement on which styles are better or worse.

First of all, it is evident that there are far fewer women entrepreneurs today than men. According to a recent article in the Huffington Post, last year marked a new high for female CEOs in Fortune 500 companies, but the percentage big companies run by women is still less than 4%. In startups and small companies, the numbers are much better, but still estimated to be below 25%.

Yet, according to a study by the Center for Women’s Business Research, the number of female-run firms is growing twice as fast as all the rest, so women are catching up. The latest big-company addition was Ginni Rometty, who was promoted into both top titles at IBM in 2012.

Back to how entrepreneurial styles differ between the sexes, here are some observations I found from various sources on styles, not necessarily better or worse:

Leadership style. There are clear differences between males and females in their management and leadership styles, probably reflecting their genetics. Distinguishing traits of male leaders are autonomy, independence, and competition, while those of women are relations, interdependence, and cooperation. Both have their advantages.

Operational style. For operational purposes, men move quicker, are more analytical, more focused and concentrate more on the short term and on rules. In contrast, women generally gather more data, consider their context, think more long-term, and rely also on their intuitive and sympathizing characteristics. No comments on which is better.

Organizational style. Status and rank are important for men, whereas women are more comfortable working in a flat hierarchy. The structure of preferred by males resembles a hierarchy or pyramid, where authority stems from one’s position within the hierarchy, and emphasis is more upon goals and objectives than on the process.

Emotional style. The biggest surprise for me was the finding that men seek larger “emotional” networks – the complex of associations that provide warmth, praise, and encouragement. Also men tend to show more emotion in business than women do, as a form of domination and intimidation.

We know, of course, that in the real world, it all comes down to the individual, not how many X chromosomes that he or she has. As I contemplate the differences in style listed above, it seems that in fact they are complementary – yin and yang – like masculine and feminine, rather than right or wrong. Societal trends actually seem to be favoring the women these days.

The implication is that entrepreneurs of either sex would do well to find a business partner on the other side, capitalizing on the other dimension, rather than engage in a battle of the sexes. Wars are no fun for either side.

Startups: Who Creates Them and Why

Independence is the Real Driver for Entrepreneurs

Nobody is reading your company blog, so what’s next?